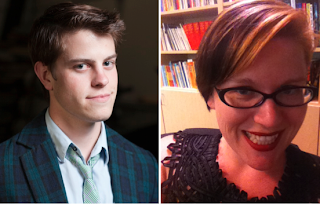 KIMBERLY: It’s great to be working with you, Skyler. We’ve had a lot of conversations about THREE STEPS BACK with Peter already, but it’s great to have a chance to hear your thoughts. I’m curious, what were your first impressions when you read the play? What drew you in?

SKYLER: It really is great to get to work with you and Peter on THREE STEPS BACK. When I first read Peter’s play I was struck by his use of perspective. You might have heard that the most exciting parts of some plays happen offstage.

SKYLER: Right! I love how Peter has turned that idea upside down and shown this story from three different angles. I found myself entranced with finding clues from one act that came to fruition in the following acts. I was also struck by Peter’s ability to create revelations that surprised both me and the characters within his play through exciting plot twists.  It really is a play that keeps you guessing what will happen next.

KIMBERLY: I agree, the structure of this play is unexpected–it’s three acts, but the action isn’t continuous. Each act covers the same period of time, but in a different location. I love the puzzle of putting the pieces together, and I think audiences will really respond to the challenge of figuring out how the characters relate to one another. It will be a challenge for you, as a director, to help communicate some complicated twists and turns with only a short rehearsal period and with actors confined to music stands. Peter is also a director–what’s it like to work with a playwright who’s also got a directing background?

SKYLER:  It is a short rehearsal period isn’t it?  I bet the Broadway production of Noises Off had a bit more time to fine tune all the entrances and exits.  Game on!  Peter is indeed a man of many talents.  I am finding that Peter’s keen eye as a director only strengthens his work as a playwright.  Throughout the piece Peter has dropped clues about the way the staging works in his mind.  As a director, this is very helpful as I am able to piece together the playwright’s intent and fill in the blanks along the way. The playwright is setting pen to paper and it is my job to bring that to life.

SKYLER: They really do.  I hear they are pretty talented too.

KIMBERLY: It’s exciting to have so many talented people gathering together. I’m glad to get a chance to play with Artists at Play. This is a great play to help kick off their new reading series (along with Alice Tuan’s IGGY WOO)–smart and funny but complicated. There’s a lot of interesting themes Peter’s grappling with: a dysfunctional family, a teenage girl exploring religion, parents navigating the balance of their own needs versus the needs of their offspring.

SKYLER:  This play really does pack quite the punch. I am excited that we get to not only work on this play with Artists at Play, but we get a chance to work together again. This play also takes me back home as it is set in Fresno, which is where I was born and raised.

KIMBERLY: That’s right! You’ve got the Fresno connection! And just like you, many of these characters are trying to find their way OUT of Fresno.

SKYLER: I mean, once you leave Fresno, the only thing left to do is direct a play about Fresno. But in all seriousness, I can’t wait to jump into rehearsals and work with Peter to make this play come to life.

KIMBERLY: Me too. Only one more week until we’ve got an audience.

SKYLER: In that case, people should stop reading this enthralling interview and buy their tickets now!

Three Steps Back by Peter J. Kuo will be presented as part of Artists at Play’s reading series day on Sunday, March 24th.  Get your meal tickets now!