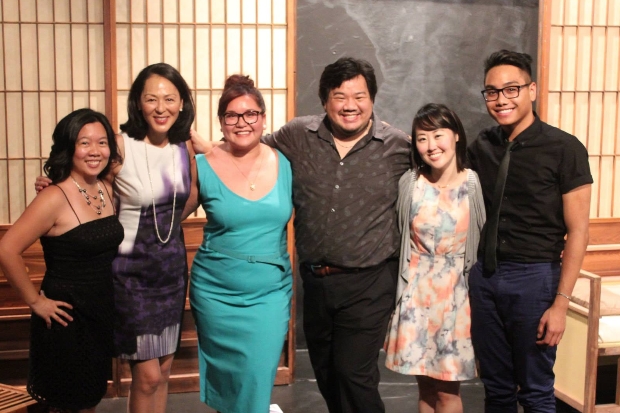 As we now plan for our fifth season, Artists at Play will continue to present shows created by Asian American artists, stories of those underrepresented in Los Angeles theatre. Won’t you make an online tax-deductible donation to join us in our mission?

At the start of the new year, Artists at Play will host a January kick-off event and announce our next mainstage production. Along with the spring readings and summer fundraiser, our 2015 season will include a partnership with Center Theatre Group, plus some other events in the works. And as a new board member of the Consortium of Asian American Theaters and Artists, we will be working on a national level to improve diversity and inclusion in American theatre.We hope you will help Artists at Play in 2015 with a tax-deductible donation, making you our partner in curating quality theatre in Los Angeles.

In 2014, Artists at Play was able to contribute to Los Angeles theatre with various readings and our fourth L.A. premiere production. Here’s a recap of the year…

In the spring, we shared with you two new plays as part of the Artists at Play Readings: She Kills Monsters: Adventurer’s Edition by Qui Nguyen, a fun new version of an already published/produced work, along with the still-in-development Marabella by local playwright Boni B. Alvarez.

In the summer, we had a special benefit reading of The Parisian Woman by Beau Willimon (creator/executive producer of House of Cards). Hosted by Randy and Mari Tamura, the event featured Francois Chau, Amy Hill, Tamlyn Tomita and Trieu Tran. Attendees loved the diverse casting of a mainstream play, and those who saw the production at South Coast Repertory remarked how they preferred our cast!

In the fall, we produced the Los Angeles premiere of 99 Histories by the writer Julia Cho (not to be confused with founding member Julia Cho, who starred in the production). We were honored to present the “homecoming” for this play, which is set in Los Angeles and written 10 years ago.

This year, Artists at Play attended the Theatre Communications Group (TCG) national conference in San Diego as well as the 4th National Asian American Theater Festival & Conference in Philadelphia. Expanding on our local theatre presence, we are proud of our recent appointment to the board of the Consortium of Asian American Theaters and Artists and excited to help organize the next gathering of Asian American theatre professionals in 2016!Artists at Play will continue to build upon the artistic quality and diversity of our past shows: Ching Chong Chinaman by Lauren Yee, Edith Can Shoot Things and Hit Them by A. Rey Pamatmat, Cowboy Versus Samurai by Michael Golamco, and our most recent production, 99 Histories. You can offer your support here or here.Thank you for another great season, and here’s to 2015!